owing to Xbox Canada, ID@Xbox and Ratalaika Games media coverage and offering us a copy of the game to try out its games. Therefore, the publisher/developer gives us permission to distribute and/or use the game excerpts for our production needs and does not interfere in any way with final pricing.

Needless to say, titles are multiplying among our friends at Ratalaika Games, and this time it’s the turn Static trackingfrom the studio Headwear Games, to offer us a mystery psychological thriller title. Since this style is one of my favorites, I let myself try this style to see what it was all about. Here’s what I found there…

First of all, I started the game Xbox Series X thanks to the code they gave me, but I liked this version (unique) had major bugs that hindered progress, Ratalaika Games sent me the PS5/4 code so I could test it and review it. As you read this, the Series X version is already up and running thanks to the latest updates. That’s what it’s called!

By launching the game, you will be able to see the boldness of Headware Games studio’s chosen art direction modeled after the games visuals. 3D from the early PlayStation/Xbox era. The graphical aspect of Chasing Static, with its huge geometric shapes decorated with large low-res pixelated textures, may turn some people off, unless they’re fans of retro-looking games from the 1990s and 2000s. 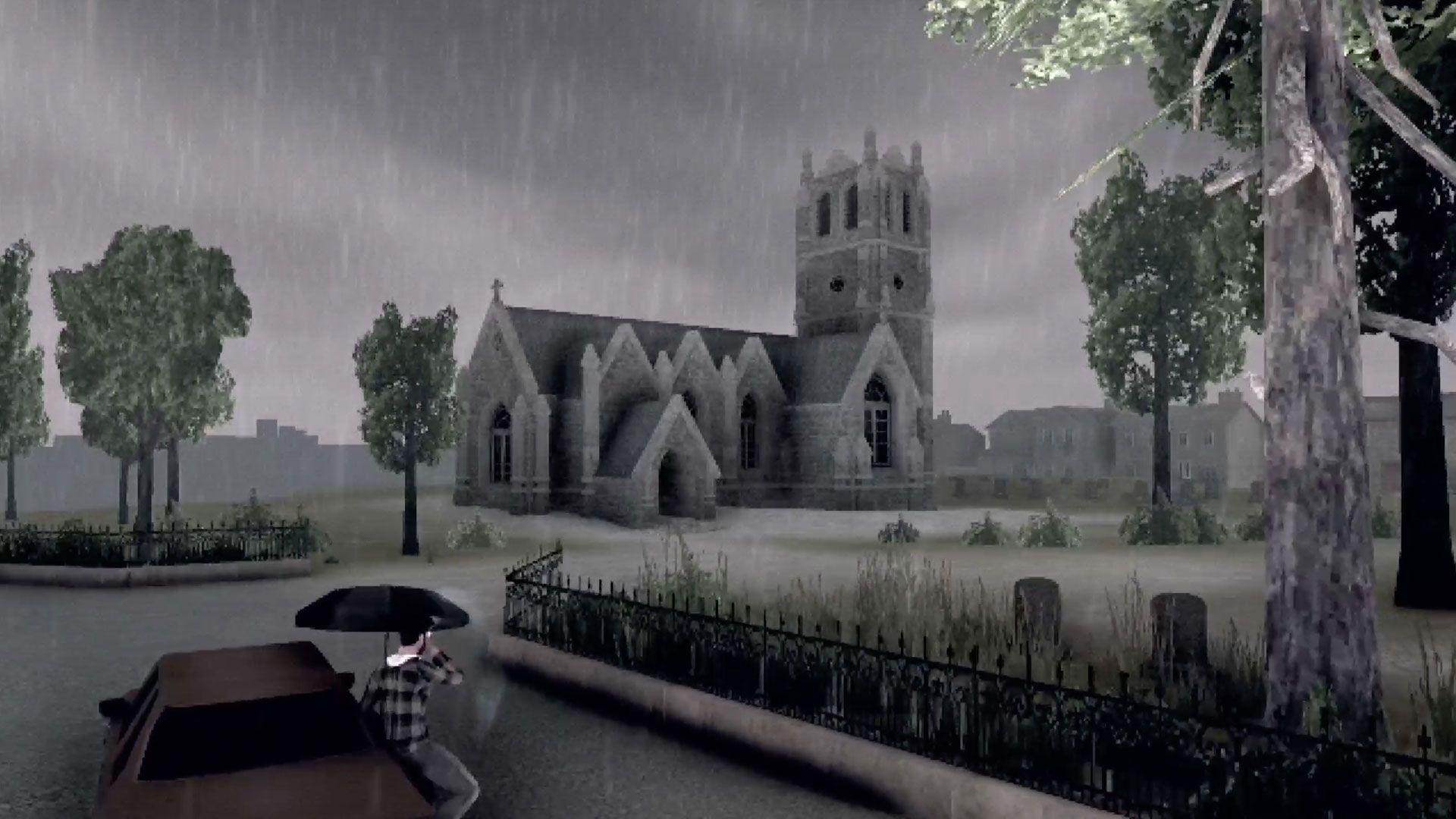 On the other hand, I encourage you to go beyond it and invest in the adventure it offers. Because without a title to grab you, its mysterious atmosphere will definitely please you, especially if you like that difficult to express feeling that leads to the weight of the initial visual and audio atmosphere. silent Hill.

The story begins when our character, Chris Selwood, receives the only personal effect left after his father’s death: the latter’s notebook. Chris and his father have not spoken to each other for several years, and after this tragic event, Chris decides to return to his childhood hometown. Stopping briefly at a cafe on the highway, he meets ChrisAneiralocal waiter. 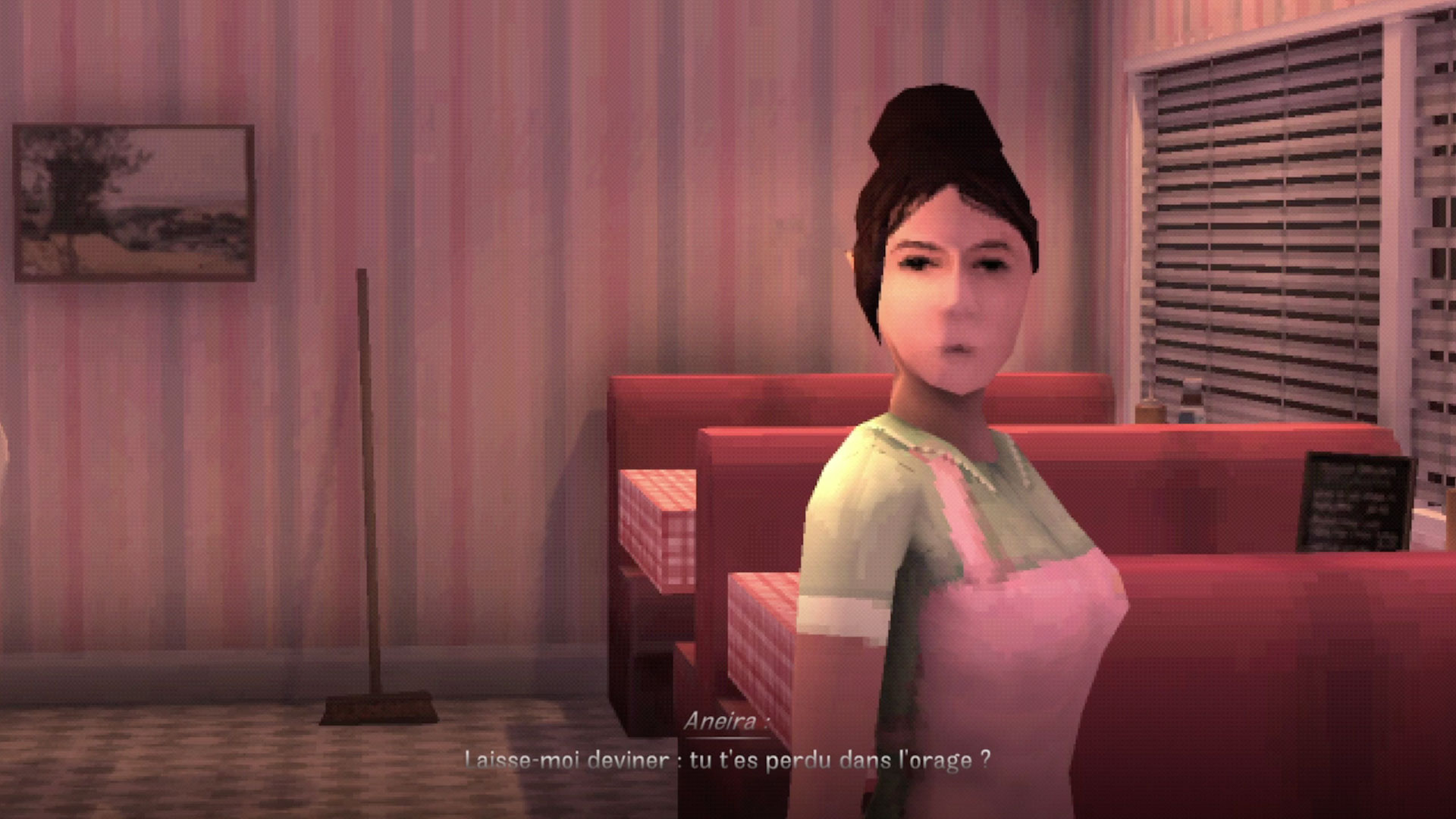 As the two discuss, the power goes out and Aneira asks Chris for help to restore the power. After the power returns, Chris sees Aneira nailed to the ceiling of the cafe, as if she were a demonic entity. Being too much for him, our character faints. When he wakes up, the earth appears to be now abandoned and plunged into an incomprehensible parallel dimension. This is where we officially take over from Chris and go on a quest to find answers to why we suddenly find ourselves trapped in this place, unable to leave the small town. Hearth and surroundings… 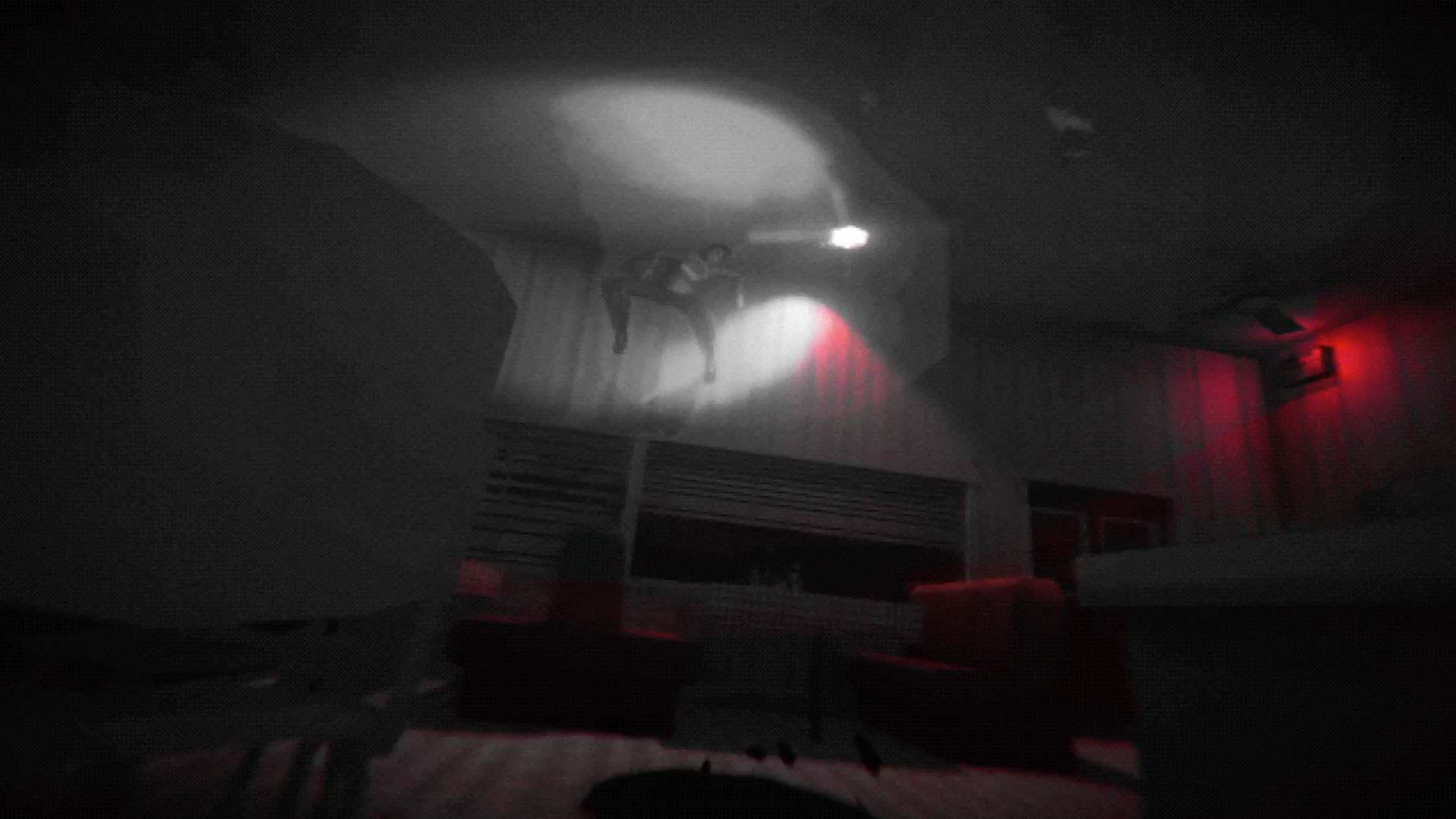 Static Chasing, for the most part, is another title I like to call “walking simulator“. In this case, the search for secrets and answers is at the forefront, and you should not expect to fight with various creatures from another dimension. In fact, the studio called it “psychological horror adventure“, which corresponds to the story you will experience through the eyes of Chris. From a first-person perspective, we will travel around the Hearth to find clues and objects that will help us finally escape from the city.

On our way, we will find different texts, different objects and witness inexplicable events, which will help us see things more clearly. But I advise you right away: everything will make more sense to you only when you reach the end of the story. Because before we jump to conclusions, let’s just say that you might have a little trouble figuring out where it all goes. The scenario will also be presented to you in a cinematic form, but static without wanting to play on words with the title of the game.

At the beginning of the game you will find frequency fluctuation sensor, a tool that will allow you to capture certain traces of past events and guide you to them. After finding the source, a short scene will play that tells another part of the story. I like this principle, but I also found that the game doesn’t take full advantage of it. Also, we have to find the exact place to run the scripts that trigger these cutscenes, which sometimes causes us to loop around. . Although I understand that these scenes represent traces of the past, I found their visual representation somewhat ugly. In addition to drawing barely perceptible silhouettes in a crackling field of static frequencies, everything fades to black and white. The idea is good, but the presentation took me away from the story a bit… 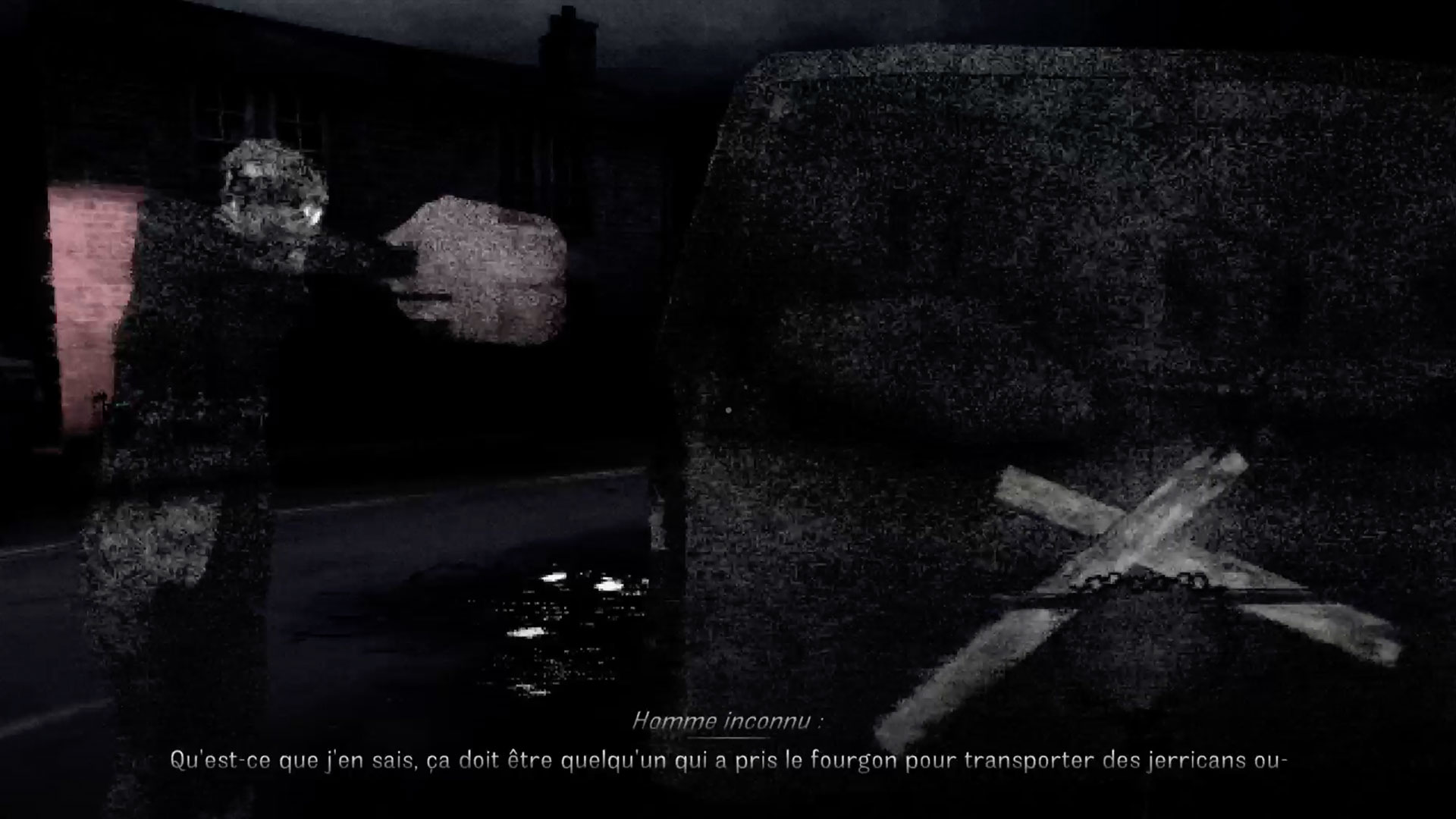 On the other hand, even if the motion does not creep in any way, the game it’s entertaining and the mystery surrounding the Hearth and the disappearance of its inhabitants keeps us captivated. You’ll find objects here and there to use for certain specific tasks. These items will be added to a very well-crafted inventory, and when a location requires you to use one of these, everything will be done almost automatically. For example: if you come to a locked door, simply checking it will open the inventory menu and you’ll need to use the appropriate item to progress. It’s simple and it does the job!

The only thing I notice is that one flange of the text is not translated. I don’t know if it was on purpose or not, but I found it a bit odd… Another thing I was a bit dissatisfied with was the lack of puzzles to solve. You’ll certainly find a few imitation puzzles here and there, but nothing that will require you to think for a few minutes or even use a variety of senses to solve them. 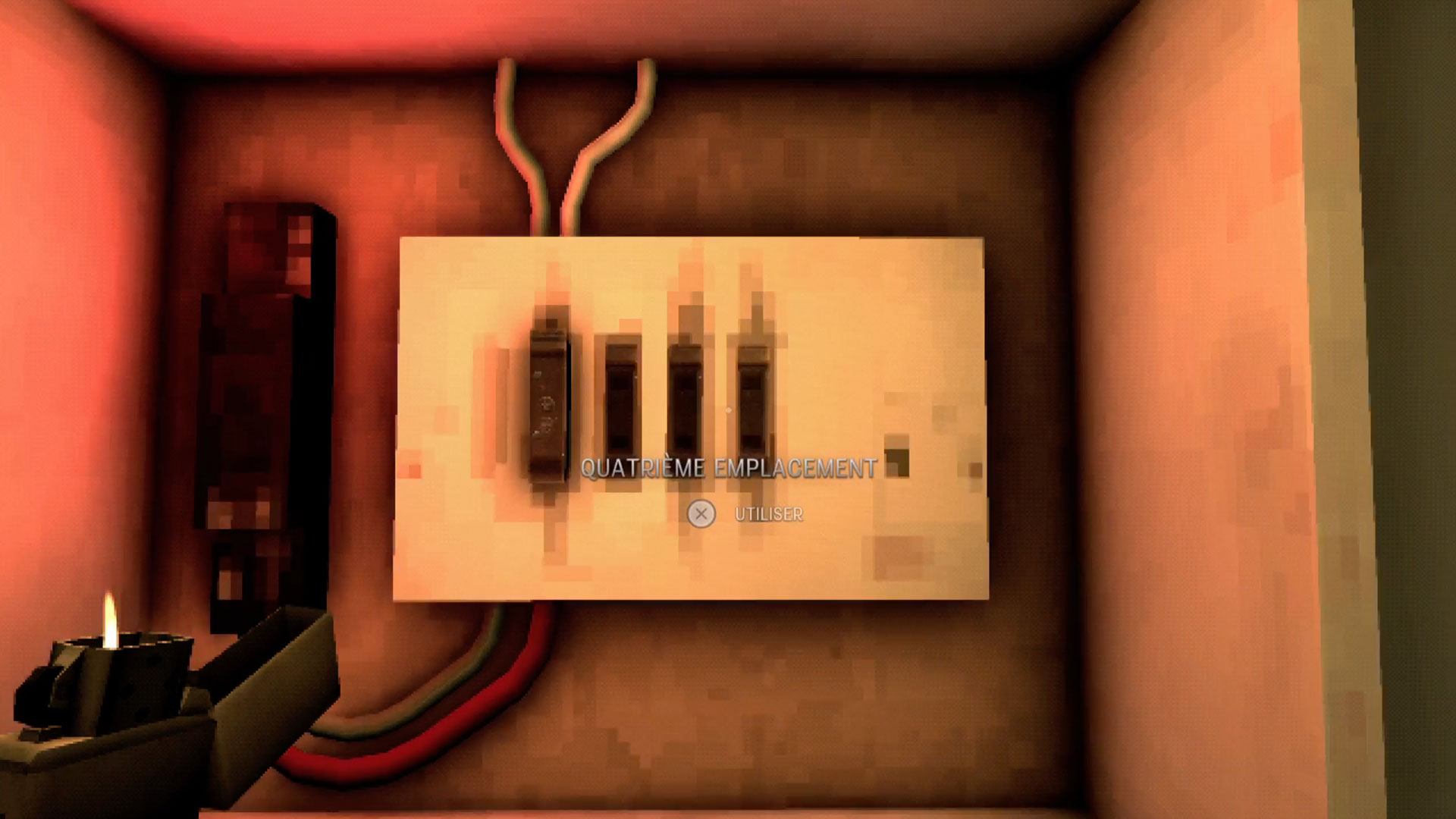 Even if the environments are not very large, you will discover old phones that will allow you to transport them from one place to another in seconds. I also liked how everything was presented to us. This and also the way we can save our game using a Polaroid style camera. Simply selecting it in the inventory is enough to be able to take a picture of where we will add this save point to our game options menu. 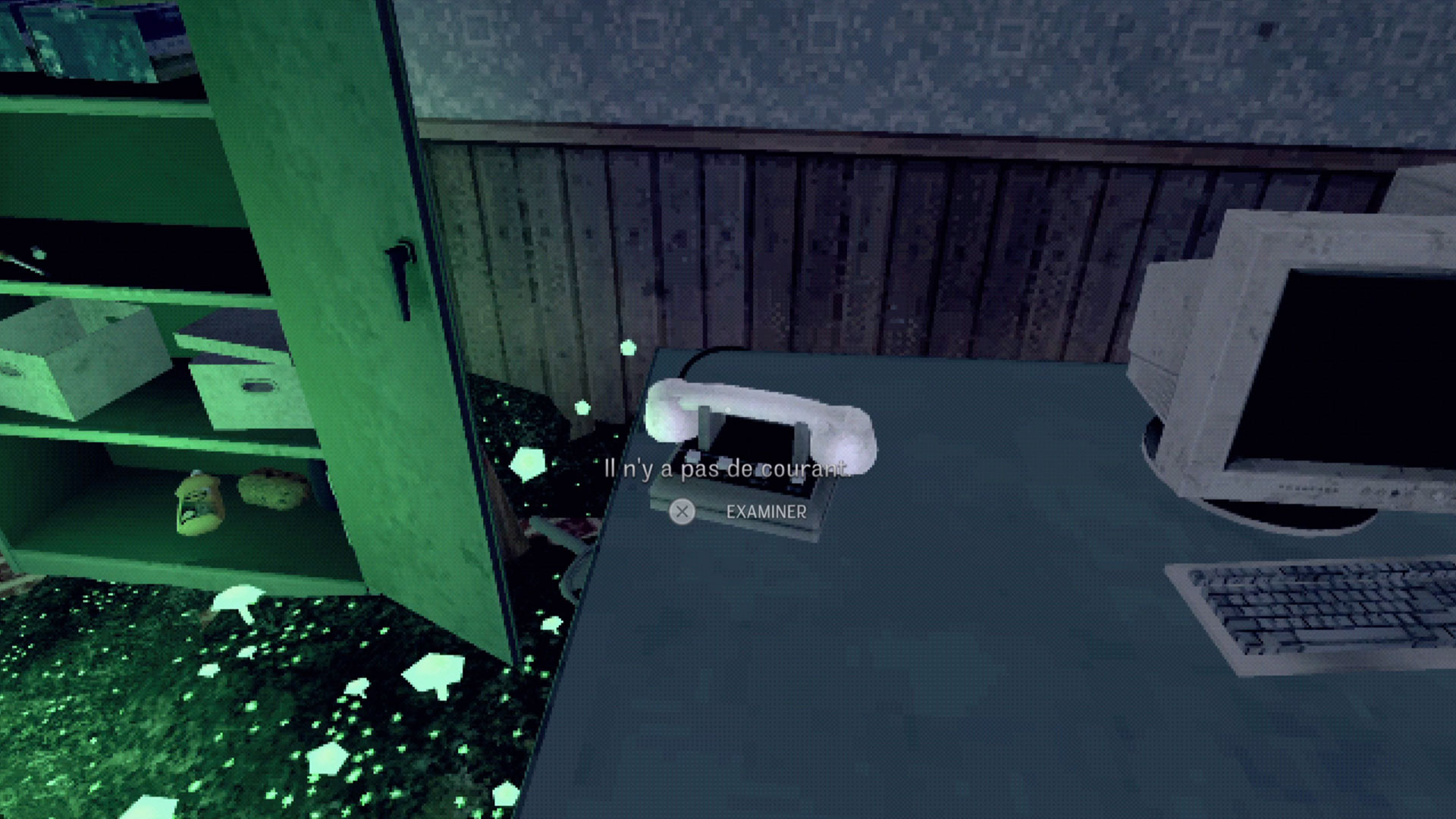 In principle, Chasing Static may not be the best title in this category, but its atmosphere alone makes the game very enjoyable. Like other games of this type, expect the adventure to take you 2 to 5 hours at most. The beauty of such short games is how easy it is to earn achievements and trophies. With a little research, will easily earn you Platinum on PlayStation. Obviously, the price may still be a bit high for my taste, bordering on CAN$20. Personally, I find the price reasonable for what the game offers in terms of overall satisfaction. If you see it on sale, jump on it, you’ll have a reason to enjoy it for less. With two trophies left to get, I’m going right back to Secret of the Furnace…

Visit to learn about the criteria of our rating system this page.

Please note that the version tested is the version on PS5. The game is also available on Xbox Series, PS4, Xbox One, Switch and PC.

Want to support the channel?