A fun pre-date? Not sure… Although with Joe and Mac we can have a good laugh!

owing to Mr Nutz Studio and Microids who provided us with a free copy of the game for media coverage and testing. Therefore, the publisher/developer gives us permission to distribute and/or use the game excerpts for our production needs and does not interfere in any way with final pricing. #Article 13 Free

Nostalgia when you hug us…

” The best soups are made in old pots ! This is a parable the French publisher knows all too well! Yes, it is an old story that still reaches us Microids At the end of 2022. Then Sweets, Asterix, Marsupilami this New Joe and Mac: Caveman Ninja It’s designed to rekindle our nostalgia so current and so lucrative… Joe & Mac won’t come to refresh everyone’s memory. Honestly, this name will bring back old memories from 30 years ago (at least) to those (above all else) experienced the horrors of arcades.

Colors, great sprites, and funny music was enough to widen the eyes of the youth of that time who dreamed of these places of destruction. That’s why Microïds tries to revive these emotions, these memories of a lost era, with the rebirth of the Joe & Mac saga.

Small disappointment at the beginning

This mission given by Microïds returns to the young Parisian studio Mr. Nutz Studio. Don’t confuse this with the late 1993 French game Mr. Nutz released by Ocean. This studio has just completed another refresh task (in French in the text) game” Asterix and Obelix: Beat them all! », from the arcade game developed by Konami in the same period. Therefore, a new mission of restoration that prompts the chroniclers, we take a deep interest in uncovering these old memories that are very well where they are.

While we’re hoping to see something more than a simple dust-up, we quickly realize that this is simply a rehash of the success of the first episode of the (very) short saga it spawned. Data East In 1991. A little disappointed by this observation, we regain hope by discovering a beautifully designed title screen. No third episode, but more content than expected. Indeed, the interface offers an obvious arcade version, but also an expansion, a kind of recreation of the arcade, but with expanded and modified levels. The game is in French and the difficulty levels are more than enough to adjust us according to our skills.

It has no ambition

Come on, the game starts and the smile is quickly formed. Undoubtedly, there were no big surprises in the environments, but it was the subject of a completely satisfactory visual work. The 90s influence is preserved with a cascade of colors, well-inspired designs that have already made an impact. Asterix and Obelix: Beat them all! “. Good taste, but also a few points of initiative, especially with completely redesigned characters, all of which are as fun as their fathers.

Obviously, we could have gone further, like with the animation of the environments, which look a bit inert despite their quality. Some would certainly have preferred a 2.5D game to make things more lifelike, but Microïds’ specification didn’t embrace that ambition. 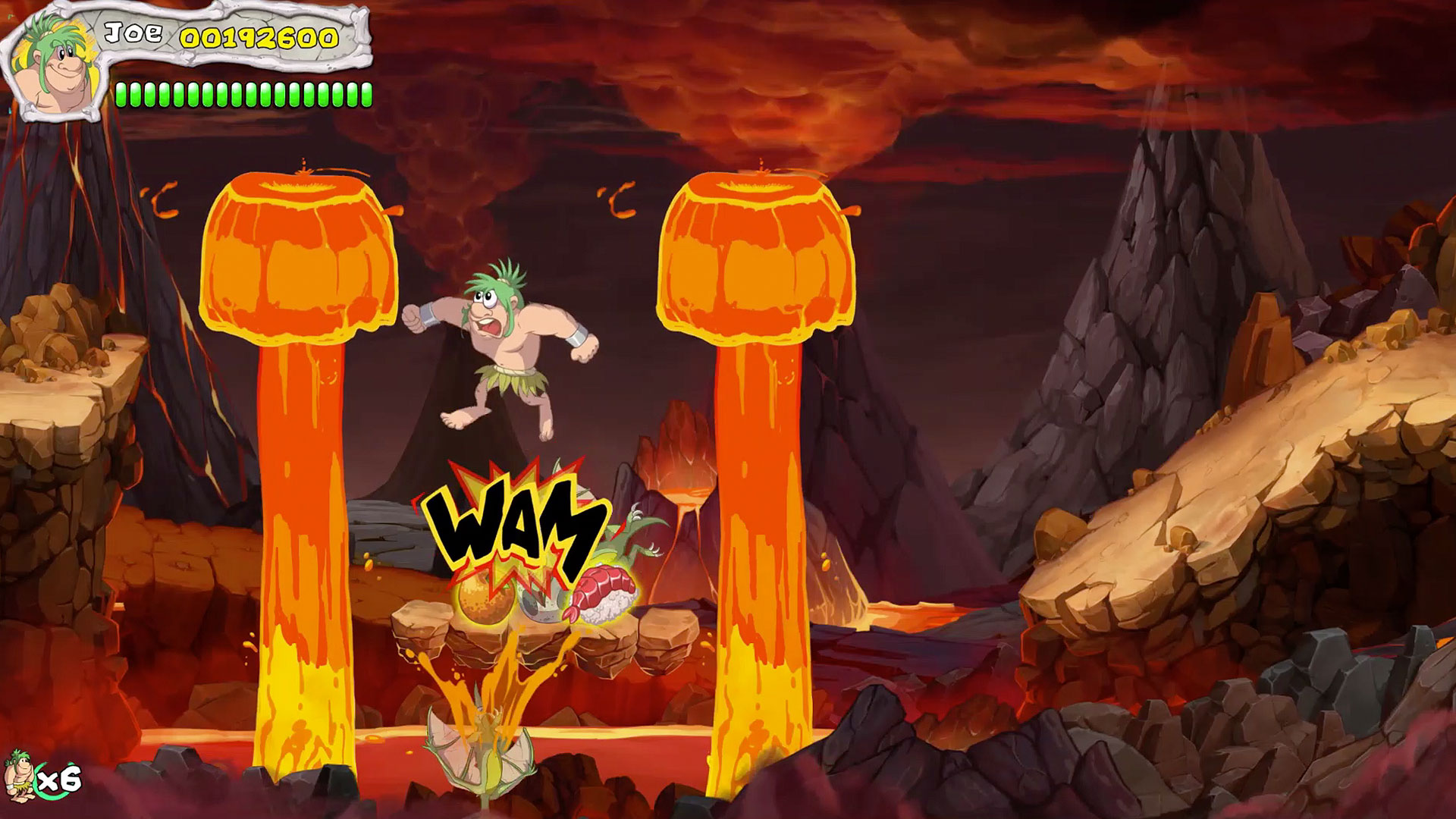 Despite this lack of will to break out of simple recovery, the game will still entertain young and old alike; Enemies have facial expressions, bosses are always impressive with their size, and prisoners are always so… charming. I’m not sure the message will get through today. The animations may seem a little light, as they are strictly faithful to the animations of the 90s. Microïds has chosen sobriety and simplicity to give us a very animated game without forgetting the feelings of the past.

A few touches of modernity

The music side is atmospheric and very successful. Jokes, in a slightly a tone donkey cong, in large numbers, they appropriately accompany what we see on screen. If the voices appear a little lower, we can still say that the work of art is not brilliant, but it still manages to convince us. 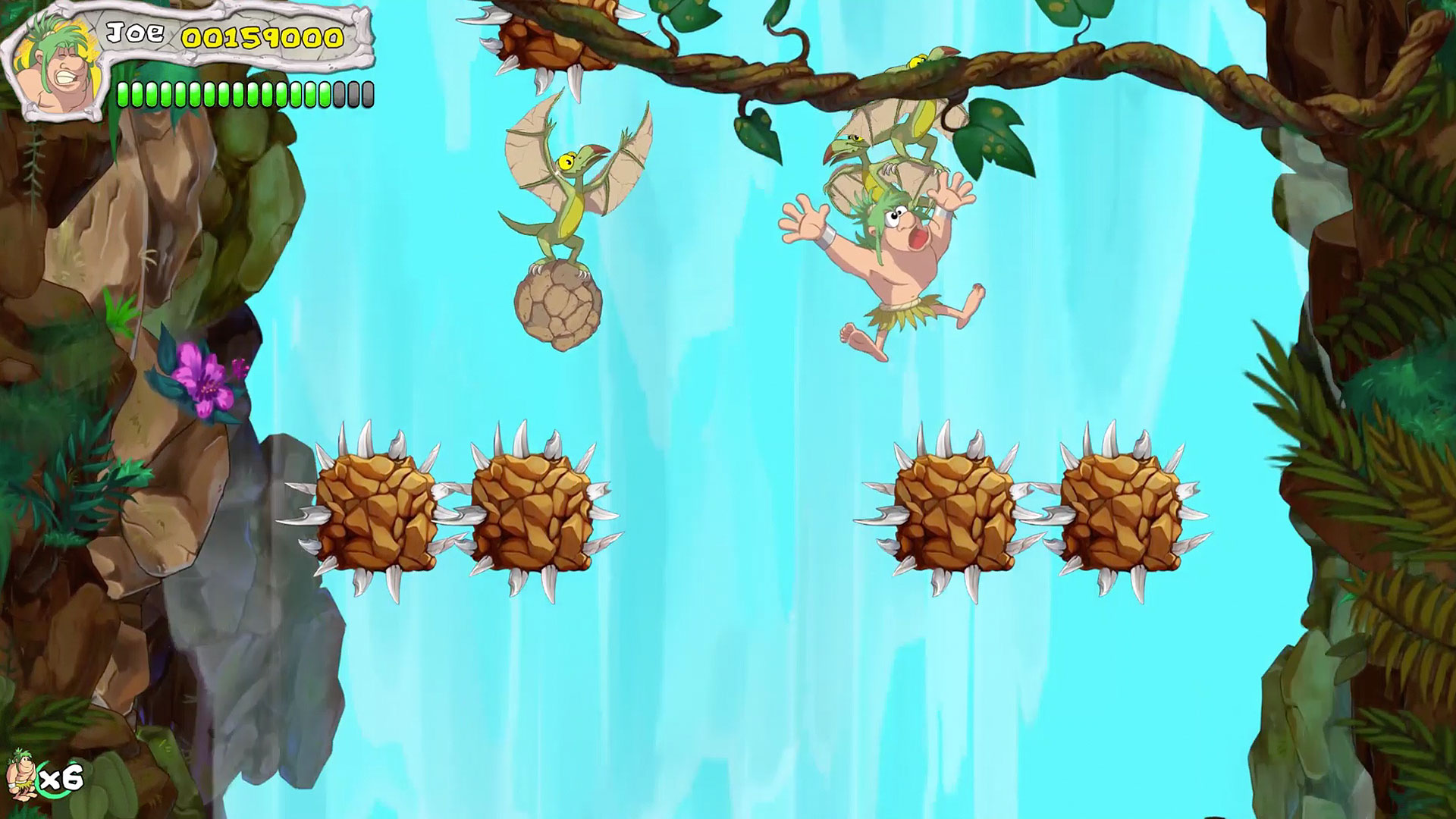 Data East offers an Arcade section that’s faithful to the game, and it’s lucky to have several difficulty levels. Mr. Nutz Studio wanted to offer a real challenge like its predecessor. Enemies are everywhere, bosses are harder than normal. Easy and very easy, the ride is easy and peaceful, which allows you to quickly explore the whole game and also gives access to the youngest. 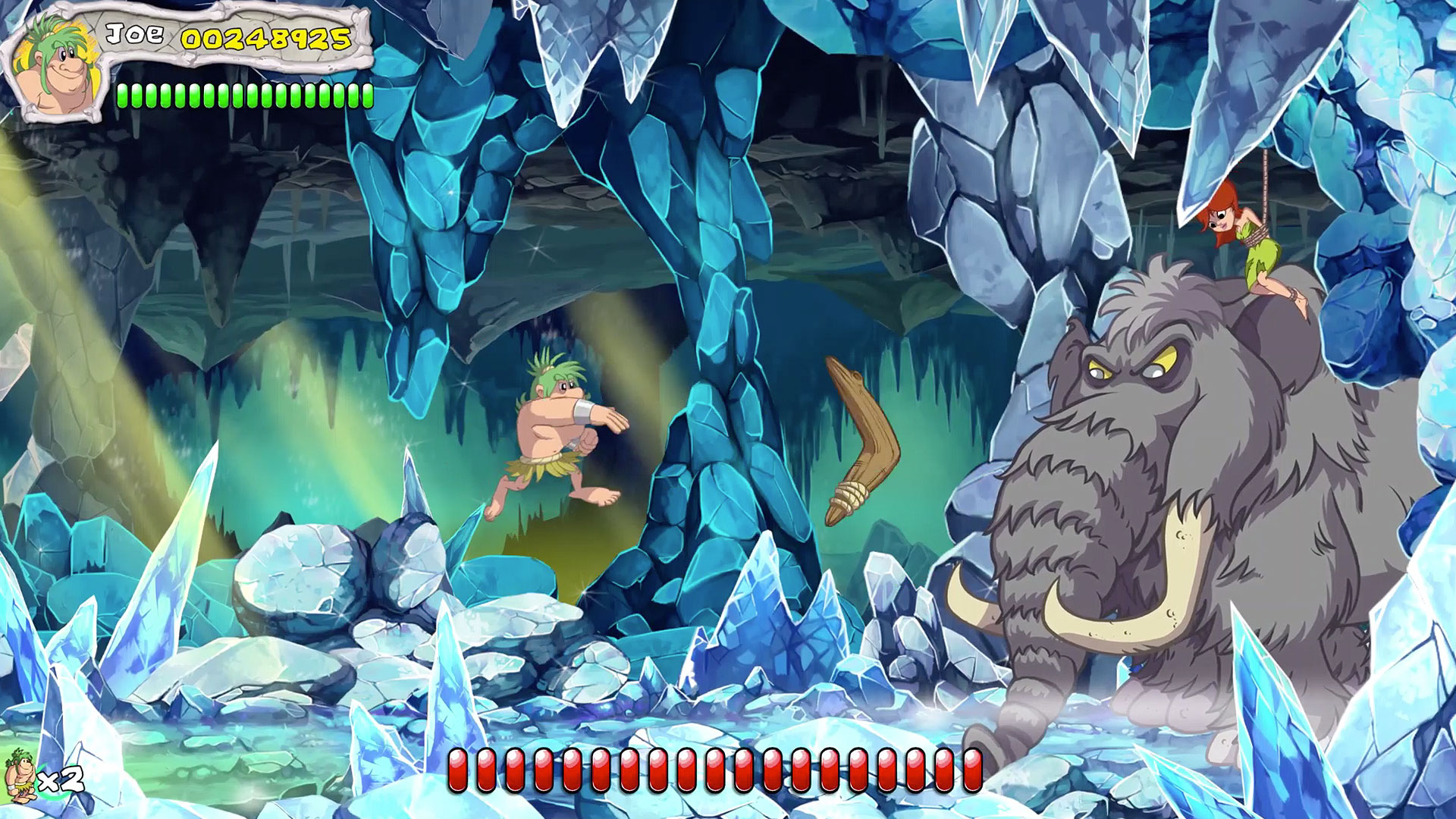 Also, some modern touches have not been forgotten, such as the management of the life bar and waypoints; they allow you to smooth out fatigue, especially in solo mode. With each stun hit on an enemy, a food bonus explodes, which raises the life bar slightly. It is up to you to take the necessary risks to restore yourself as needed.

Another positive point is the playability and weapons. There’s no real difference between the Joe and the Mac, too bad, but both are in shape to meet all your needs in action. The character responds well, which allows for precise jumps, which are very useful in fine sections (the descent of a river or the level of volcanoes). The higher roll jump is a little harder to catch, but all very playable. 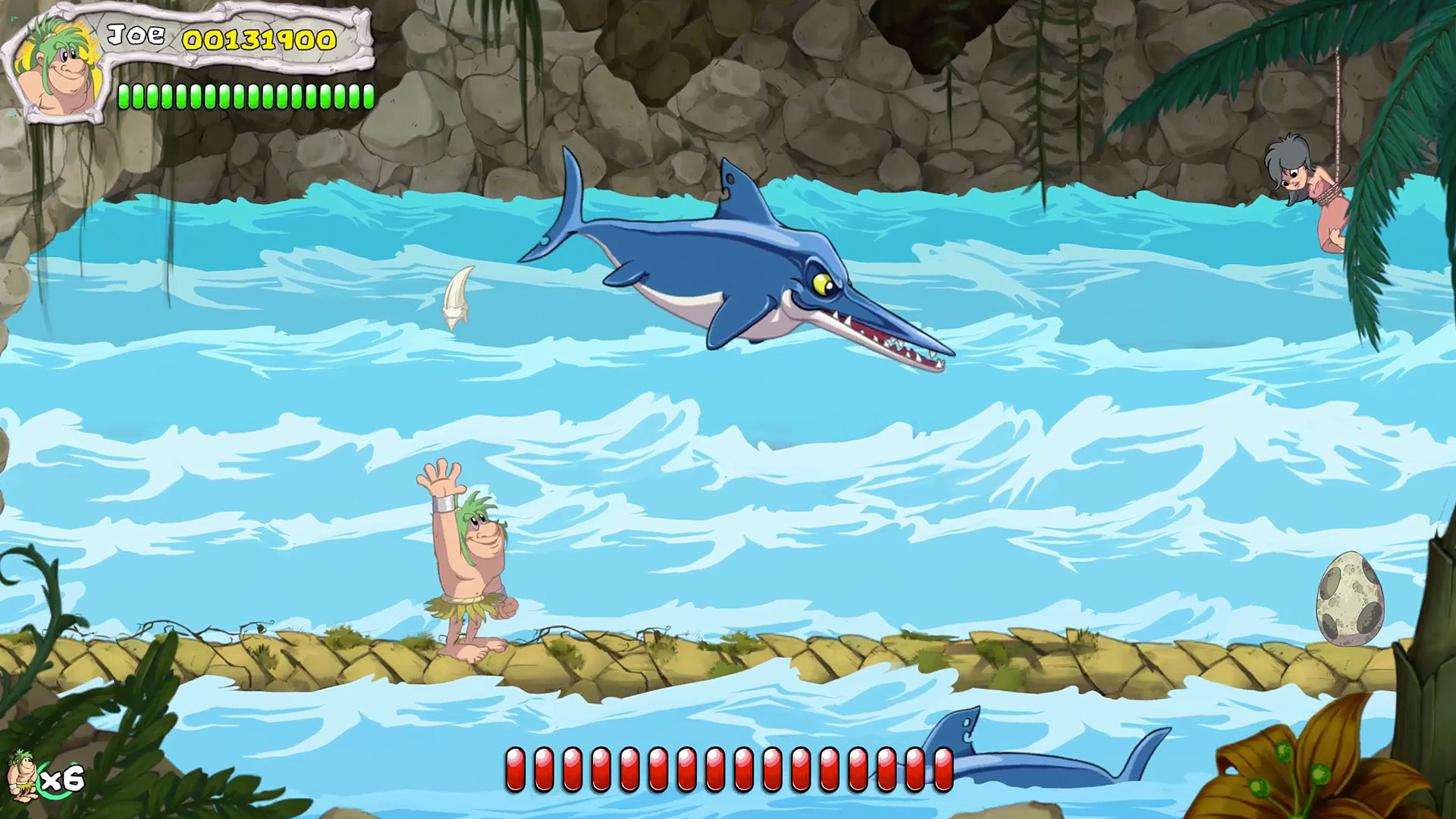 Similarly, the weapons are plentiful and varied enough to keep us entertained and going through the adventure. A stone axe, a boomerang, and a lot of other crap, nothing is forgotten, and you can even create a special attack by pressing the action button, which is very useful for dealing with the most hardened bosses.

Why not go further?

Finally, a good little platformer that won’t make us forget a certain frustration has emerged as hours of gameplay progress. Instead of seeing a faithful transcription of the first episode, perhaps the game should have been seen as a composite of the two aired episodes. In the Arcade while maintaining the best levels. There’s an expansion, of course, but it only largely retains the arcade version. So why not start a whole new adventure that will succeed in convincing us to pay the high price demanded by Microïds. 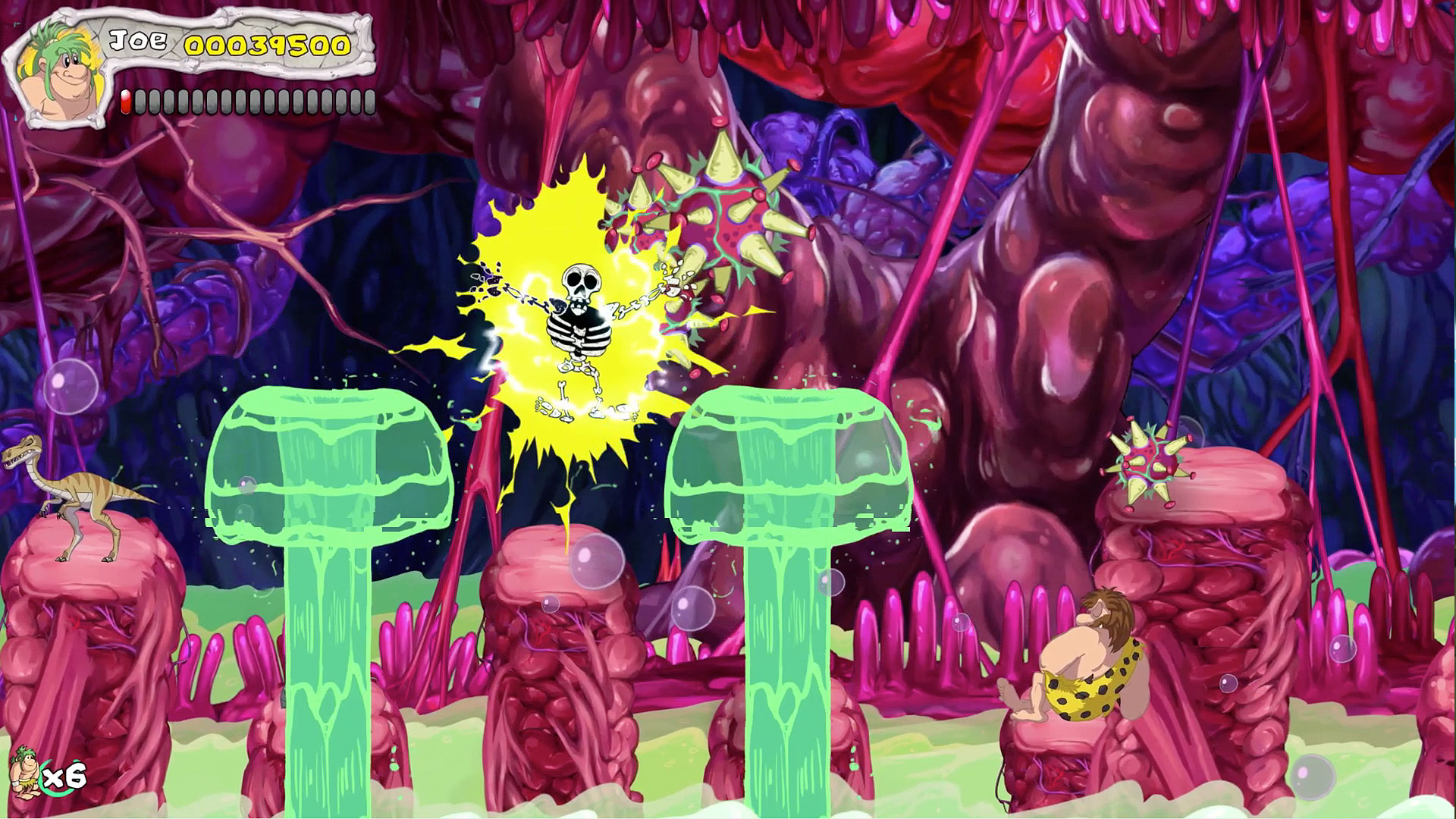 In conclusion, Mr. Nutz Studio has fulfilled its mission to erase the saga that remains in the hearts of some players. A faithful, highly entertaining game for two, without being overwhelming, it offers some very pleasant colors to think about in this persistent gray of winter. Unfortunately, if the fun is there, the frustration is not far away. Still, the technicalities of Microids did not allow for the technical ambition and boldness of a new adventure that would have been very well received. Damage.

Visit to learn about the criteria of our rating system this page.

Note that the trial version is open computer. The game is also available on PS5, Xbox Series, PS4, Xbox One and Switch.

Want to support the channel?