Thousands of students from more than a dozen universities and colleges across the country staged a coordinated hour-long walkout Monday afternoon against the new government’s plan to overhaul the justice system, following mass protests that have mobilized Israelis over the past two years. A move the organizers are determined to continue on weekends.

At 12:30 p.m., scores of students from the country’s largest institutions of higher education walked out of classes and marched outside the premises to protest the Supreme Court’s plan to weaken the stalled Supreme Court. and it would allow the Knesset to re-enact a bill previously invalidated by judges. The government also plans to control the commission responsible for appointing magistrates and give ministers the power to appoint their own legal advisers.

Get our free daily edition by email so you don’t miss any of the best news! Sign up for free!

Rallies were held at Hebrew University, Tel Aviv University, Haifa University, Bar-Ilan University, Ben-Gurion University, Reichman University and Technion. Many of these academic institutions allowed students to participate formally or informally in this protest movement initiated by the Student Challenge, a new organization calling itself a non-partisan democracy advocacy group.

The group said in a statement that the walkouts were the start of a “long, determined and uncompromising struggle against regime change” that would lead to more protest initiatives on campus and beyond.

“We students do not want to remain silent in the face of the dangerous abolition of the judicial system. This is a fight for our future against a government that threatens to trample on democracy under the guise of tyranny of the majority and will subsequently harm the equality and freedoms of many groups that thrive in the population without any restrictions. Israeli. We are determined to end this madness and this is just the beginning,” he added.

Hundreds of students demonstrated at the Hebrew University, with a small number waving Palestinian flags to protest Israel’s military control of the West Bank.

Yorai Lahav-Hertzano, an MP from the opposition Yesh Atid party, came to the rally to show his support: “I think young Israelis have realized that their future is at stake and destroying democracy will destroy their future.” As hundreds of people, including teachers, gathered at Tel Aviv University, several counter-protesters attacked former Supreme Court President Aharon Barak – whose reforms he plans to overturn in the 1990s to expand judicial review. – by condemning the “judicial dictator”.

“Students all over the world are waking up. No one will be able to stop them,” said law professor Issy Rosen-Zvi during the protest. “You are our strength, our future. No one is more important than you in the struggle for democracy. It is true that I usually speak in front of the public only in classes, but today it is relevant.”

Similar protests drew more than 100 people at Ben-Gurion University of the Negev in Beersheba, where Yesh Atid MK Yasmin Sacks-Friedman said: “I came to support the students. It is important that they enter the battle. There is no time to lose.”

For his part, student Guy Popper told the Ynet news site that “the rule of the majority is not the tyranny of the majority. The reform advocated by Netanyahu and Levy threatens the rights of underrepresented minorities in government. We must prevent them.”

Supporters of the government’s plan to “repair the judicial system” also held rallies at the Technion, Haifa University and Bar-Ilan University. Im Tirtzu said they protested “in response to calls and incitements of civil disobedience by elected officials, former justice system officials and students.”

“We will not sit idly by when public officials call for civil disobedience and citizens wave flags of a terrorist group or placards equating the justice minister with a Nazi,” he said. and Nazi symbols seen on some signs during the first protest against the overhaul of the justice system on January 7.

READ: Despite near parity in total votes, Netanyahu has 8 more seats than the opposition

“The elections are over. The majority of the country’s population supports this restructuring of the judicial system. It is time to move forward and save democracy in our country. » 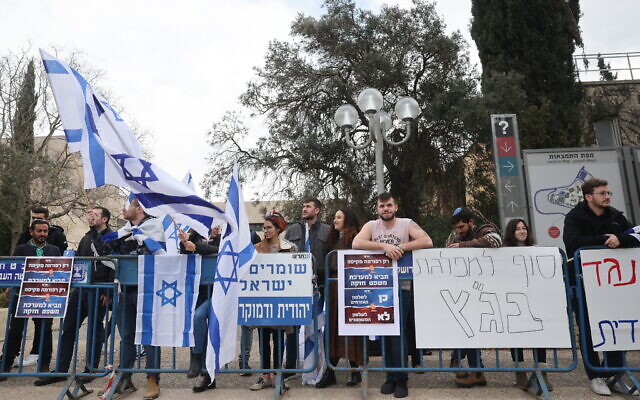 The National Union of Students, for its part, said it would not join the rallies. Its president, Elchanan Felhimar, said his organization “represents all students, including the large number of students who support the government.”

“Israeli students are not in the pocket of any political party, and therefore in the context of the current protest movement, the Union will not take sides or surrender to politics as the representative of the approximately 400,000 students in Israel. pressure from everywhere,” he added.