Thunder is unknown to us. The studios’ teaming up with the Swedish publisher has already given us some indie nuggets, including The Gunk and Lost in Random, which are currently still available on Xbox Game Pass. If we choose these two titles, it is because Wavetale approaches them in certain elements while offering us a universe that is both original and poetic. After being a Stadia exclusive since 2021, it’s finally coming to our consoles and the Xbox Store for €29.99.

A small steamer slowly approaches the island overlooked by the lighthouse. The narrator briefly tells us the story of this world that was flooded a few years ago. Once at the docks, the old sea dog Captain Bane has a few words with the inhabitants of the lighthouse, the cheerful and strong-willed young Sigrid and his grandmother Doris, whose mood is often sharply accompanied.

Before leaving, he warns them of the resurgence of the dangerous-looking “Dirty Claws” as well as the arrival of the “fog”. To prepare, Doris asks Sigrid to collect the electrical sparks scattered across her little island to restart the lighthouse.

This access sequence allows you to take control. Double-jumping, dashing on the ground or in the air, planning using the net, which is also our weapon, running, Sigrid’s action bar allows you to give accurate indications for the rest of the adventure. Verticality will feature heavily in the game. This brief training phase is punctuated by accusations and warnings from an old woman, water is a seemingly mortal threat.

However, things don’t go as planned and a giant tsunami of black molasses then appears on the horizon and engulfs Sigrid. Before she passes out, she sees a disturbing figure in the middle of the wave. When he wakes up, he finds that he has been taken to an isolated rock. His first steps into the unknown are worthy of a prophet from another time, suddenly turning the ocean into a giant playground where speed reigns supreme.

Surfing with the shade

Returning to our starting point frees Doris, the molasses captive that leads us to the rest of the adventure. We enjoy surfing fast waves, flipping Sigrid between platforms, sliding down tubes with twisting curves and hooking the hook to extremes, thus avoiding several tens of meters of diving. Enemies look vaguely like bloated ticks and offer only initial resistance, even with upgraded versions encountered later (four enemy types in total). On Sigrid’s side, her offensive arsenal doesn’t shine with variety either, as you have to settle for a simple kick, spin move, but a slower launch as well as a mid-air smash. In addition, the game is extremely permissive, because our lives increase gradually even during battles, and no damage punishes dizzy from the top of a tower. 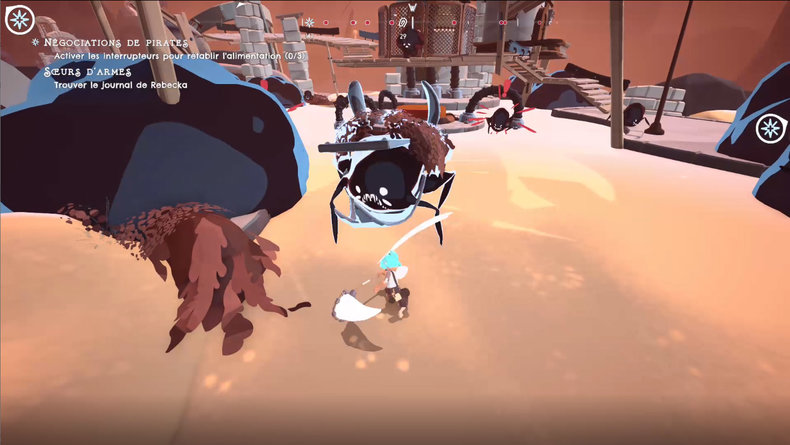 The main objectives of the scenario are extremely classic and part of the same virtuous cycle throughout the game: free the characters trapped in molasses after several battles and collect sparks to power the generator to unlock the exit to the next area. There is no risk of getting lost because they are permanently displayed on our integrated compass with the distance separating us from them.

I am a friend of (large) animals

Our progress is sometimes slowed by the presence of a giant metal snake that offers us great climbing prowess without becoming too extreme. The adventure journal is very well done. Indeed, it introduces various heroes with their characters and histories, as well as pieces of memories of the past to be collected that allow you to follow the timeline of the Wave of Fates universe.

We appreciate the very childish art direction that gives pride to the emotions of the various main characters. The relationship between Sigrid and Doris is, of course, the central element, and the grumpy old lady is especially endearing with her well-felt punchlines and general aura that brings everyone to their heels.

The shadow offers us a shell

The game benefits from a quality French localization that allows you to fully appreciate the story in Molière’s language, even if the subtitles sometimes don’t quite match the voices. The musical tracks (one of which is sung) effectively accompany Sigrid’s journey and match the various events brilliantly, oscillating between melancholy and discovery, even taking on mysterious, even downright gloomy accents during certain dark passages.

The level design offers beautiful sequences of platforms and slides, unfortunately very rare and above all very short, the lack of guilty decorative elements allows this sequence of particularly exciting figures. Only local surfer Asta Falk’s challenges allow you to really give it your all on timed courses. Other characters also offer us short tasks consisting of searching for one or more objects around.

The reward is always the same: a barrel of small sparks. Defeated enemies and the last ones collected during our exploration can be traded in Bane’s boat for purely cosmetic rewards, which we sometimes consider soberly “suspicious”.

There is nothing unusual in terms of success: the list remains particularly short, and with the exception of a handful related to racing events and, once again, the “carbar” strokes of Captain Bane’s humor (But what can you expect from a sailor with a tamed seagull? Called Steven Seagull?), every things unfold naturally throughout the story. Unfortunately, none of this is related to completing the agenda, which does not force the player to explore the gaps of the game to complete it. 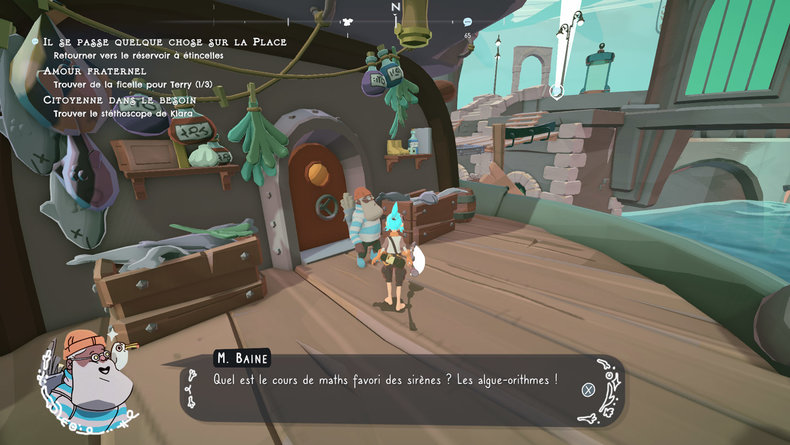 Jokes of the brain

On Xbox One, some textures appear laggy, and characters’ faces are particularly pixelated during close-ups. There are plenty of texture and collision bugs to consider, as well as some particularly restrictive automatic camera movements, especially when seen during certain rather technical jumps. The adventure is very short, about six hours, but it maintains a certain narrative rhythm. Obviously, it would be harmful to want to prolong the experiment unnecessarily, except to suggest additional difficulties.

Tested on Xbox One and Xbox Series X